Vitamin D is widely known for its role in calcium homeostasis and maintenance of skeletal health, and in addition is becoming increasingly known to be crucial to many areas of health and chronic disease prevention. Activated vitamin D functions more as a hormone than a vitamin, with roles in immune modulation, insulin and thyroid hormone secretion, cell cycle regulation, cardiovascular function and the control of inflammation. Due to its wide range of actions, and the high prevalence of vitamin D3 deficiency, supplementation with a stable form of vitamin D3 has the potential to benefit a large section of the population.

o To reduce risk of fracture

Sources of vitamin D For most people, solar UVB radiation (wavelengths 280-315 nm) is the main natural source of Vitamin D3 (cholecalciferol). Sunscreens and high skin pigmentation can reduce the UVB-mediated production of D3 – for example, SPF15 factor sunscreen can reduce D3 production by 99%. Dietary sources are limited, including animal products such as oily fish and egg yolks. Vitamin D3 is metabolised in the liver to 25- hydroxyvitamin D3 (25(OH)D, 25-hydroxycholecalciferol, or calcidiol), which is then converted in the kidney to the active form 1,25-dihydroxyvitamin D3 (1,25(OH)2D, calcitriol) . See Figure 1. A variety of factors, including serum phosphorus and parathyroid hormone, regulate the renal production of 1,25(OH)2D.

is a calcium mobilising hormone that regulates calcium metabolism through its interaction with the bone and intestine. It increases the absorption of both calcium and phosphorus, and together with parathyroid hormone it mobilises calcium and phosphorus from bone and enhances their renal reabsorption. These actions raise plasma levels to prevent hypocalcaemia. Vitamin D also has many other functions and the vitamin D receptor is expressed on a wide variety of cell types. Some of the other physiologic functions of 1,25(OH)2D include stimulation of insulin production, modulation of activated T and B lymphocyte function, effects on myocardial contractility, and promotion of thyroid-stimulating hormone secretion. A summary of the key actions of vitamin D can be seen in Figure 2. 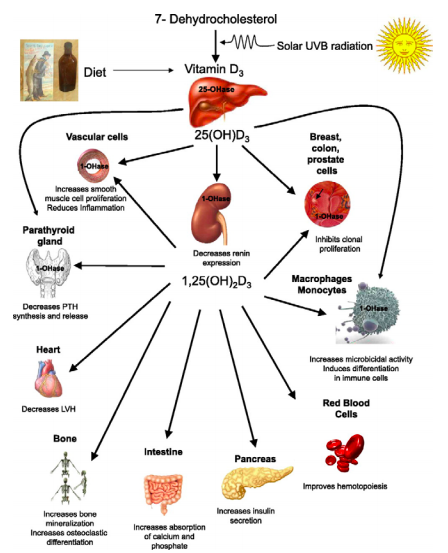 Is the most effective form of vitamin D supplementation. Vitamin D2 (ergocalciferol) is a plant derived form of vitamin D, formed following UV irradiation of the plant and fungal sterol, ergosterol. Although ergocalciferol has been used successfully in the treatment of rickets, there is no clinical trial evidence for it in the prevention of fractures, and it has been shown to have less biological efficacy than cholecalciferol. It is less effective in raising serum 25(OH)D levels, its metabolites have diminished binding affinity for binding proteins and receptors in the body, and it has a shorter shelf life.

Vitamin D supplementation can be provided in the form of a liquid or a capsule. Vitamin D is prone to oxidation, therefore it is important to ensure that the chosen formulation is very stable to prevent degradation of the vitamin D molecule.

Many reports have shown that relatively high proportions of people have inadequate levels of vitamin D. The Australian “sun smart” public health messages, aimed at reducing skin cancer, have had great impact on the population. However, there is increasing awareness that the simple public health message of sun avoidance may cause harm by increasing vitamin D insufficiency.

A study that used data from three previously published studies and a further Tasmanian study, has shed light on the extent of vitamin D deficiency in Australia. It included serum measurements of 25(OH)D from participants less than 60 years of age, with a good sample of young and middle-aged adults from southeast Queensland, the Geelong region and Tasmania. This study found that, irrespective of their location across Australia, vitamin D insufficiency was common in winter and spring. If vitamin D insufficiency is defined either as levels ≤ 80 nmol/L, then the prevalence in winter/spring was found as follows: SE Queensland 82.1%; Geelong region, 74.0%; and Tasmania, 97.0%. Levels ≤ 60 nmol/L were found in 54.8%, 50.2% and 83.7%, respectively. In Tasmania, the prevalence of vitamin D insufficiency in winter and spring was high even among those who reported high levels of sun exposure,6 suggesting that supplementation is even of more importance, as sun exposure does not always provide adequate levels.

Population surveys from Australia and New Zealand have shown that 40-57% of neonates are deficient in vitamin D, potentially increasing their risk to developmental delays and poor skeletal mineralisation and other adverse health outcomes. 7 Monitoring vitamin D levels and correcting for insufficiency in pregnant women is there for an important step in preventing neonatal deficiency.

• Those who regularly avoid sun exposure or work indoors

• Housebound, community-dwelling older and/or disabled people, those in residential care

• Medical conditions or medications affecting vitamin D metabolism and storage such as antimycobacterials and anticonvulsants, cortisone

• Infants born to vitamin D deficient mothers who are exclusively breast fed. Preliminary data suggest that lactating women may require as much as 4000–6000 IU/d of vitamin D per day to ensure enough vitamin D is transferred into the breast milk to satisfy the infant’s requirement.

• Obesity: Vitamin D status is known to be poor in obese individuals

Levels of vitamin D which indicate deficiency and excess vary between sources. A general indication of optimal serum concentrations of 25(OH)D is between 75 and 135 nmol/L. 11,12 However, up to 250 nmol/L may be considered normal in situations of high sun exposure. See Figure 3.